‘Soulhacker’: a portal to future V.R.- based psychotherapy?

The burden of mental suffering

As part in this search for a new approach we adapted a well-known psychotherapeutic strategy developed by dr. Milton Erickson. His system can best be defined as a hypnotherapeutic technique to induce dynamic metaphoric mental images with transformative power. The effectiveness of its core ingredients (working at the metaphoric symbolic emotional level and adding individual patient autonomy to the therapeutic process) - as indeed can be considered common to all good psychotherapeutic methods- is generally accepted cfr. many case reports of well documented clinical results. However, to be easily accessible this approach needs a large prevalence of talented and well-trained hypnotherapeutic practitioners with dynamic creative abilities. Moreover, many patients are not familiar with hypnotic induction as paradoxically the fear of loss of control by it (often very pronounced in PTSD patients) is at strong collision with the quest for free will, agency and autonomy.

Our method called “Soulhacker” is aimed at lifting these constraints while preserving the core of the Erickson method but adding innovative elements that could make this form of therapy even more effective.

Soulhacker at stage one: a true pilot study

Soulhacker stage 1 could not have become reality without Soulhacker stage 0. That is the deployment of the Soulhacker V.R. world in an artistic project by CREW (Cosmic Flower- Belgium). This event had already demonstrated its dynamic capacity for evoking some pronounced mood uplifting effects in randomly selected healthy volunteers and art festival visitors. From this preliminary field observation grew the inspiration for the next logical step: a clinical pilot study where patients with symptoms of depression were assessed for mood and brain function both before and after the V.R experience in order to find out if changes in brain network patterns could show an effect size large enough to inspire longer follow up studies. As this type of V.R approach is - to the best of our knowledge- unprecedented this study can righteously be labeled as a true pilot study.

True pilot studies do not need a control group but are intended at establishing proof of concept and a first estimation of the expected effect size. As such positive results inspire to find out if this method can find a place in the global psychotherapeutic arsenal aimed at helping (without harming) people suffering from psychological disorders.
This first study was subjected to preliminary consensus by an ethical committee (UZA).

The very short history of V.R. in psychiatry

Although the use of V.R. in the treatment of symptoms related to stress (relaxation, mindfulness apps) or anxiety related to specific phobia’s and/or traumatic experiences like PTSD in war veterans, is well documented, its use in the approach of people with affective symptoms (e.g. depression) is still sparsely explored. Some trials in Stanford University have shown however that using the emotional richness of a V.R.- environment good results can be obtained.

Most V.R. systems, due to still existing technical limitations, allow 3D video or only stationary embedding and use pseudo movement (using handheld controllers) to allow displacements in the virtual world. This dissociation of movement between the physical world and the virtual reality is one of the major causes of motion- aka simulator sickness.

V.R on the move

Soulhacker is founded on free body movement and exploration in a large physical space (activation of motor cortex) adding a new dimension to the V.R. experience. Previous try-outs have shown that the emotional richness evoked by this type of experience exceeds the more common V.R. as offered in games etc. while also lowering the risk for simulator sickness. The patient is now granted a large explorative autonomy. Adding elements that allow patients to alter the virtual environment inspired this application in the field of psychiatry.

It is known that inducing changes in the way people’s perception of their situation (often passive, learned helplessness and despair that stands between therapist and good clinical outcome) are a major element in the healing process and can be better altered by personal emotional experiences that like neurostimulation have the potentiality and power to trigger more lasting neuroplastic changes in brain networks. Images, stories, metaphors, symbols that are congruent to an individual’s beliefs, moral and ethical values, when activated can induce lasting changes in affect and dopaminergic flow. Such is the goal of psychotherapy but unfortunately this is a long-lasting process and very much dependent on the creativity, inspiration, insight, wisdom and empathy of the therapist. The range is broad and our application will tend to narrow this range.

In synchrony with modern tendencies in psychiatry (putting the directorship in the hands of the patients) our application -while presenting a V.R. world with metaphorical well-constructed V.R. embedding – also allows agency and autonomy by the patient while securing his/hers physical and mental safety. Patients are supervised at every moment before, during and after their V.R. experience (lasting approximately 5-10 minutes) by a trained psychotherapist (can be a psychiatrist or a psychologist) as well as by a technical assistant / helper (to assure physical patient safety fi. preventing collisions or falls in case a tracker system would fail).

The V.R. environment symbolizes in an artistic rendering (CREW) a possible transition from the world of depression (dark, stagnant, cold, black) to a world of warmth, light and life inducing at a very deep level the idea and perception that transition is possible.

Technical challenges such as tracking head and hands in large psychical spaces are non-trivial but are solved and have been thoroughly tested. 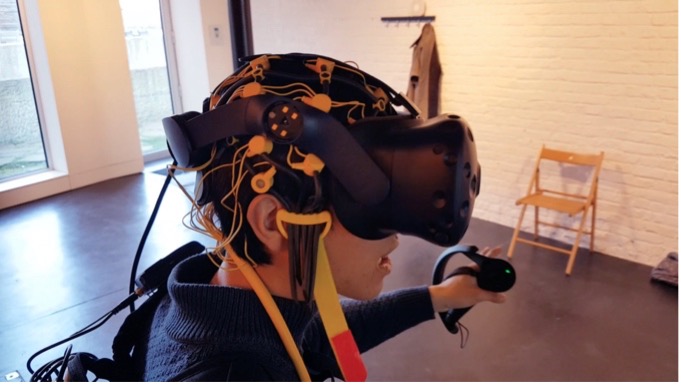 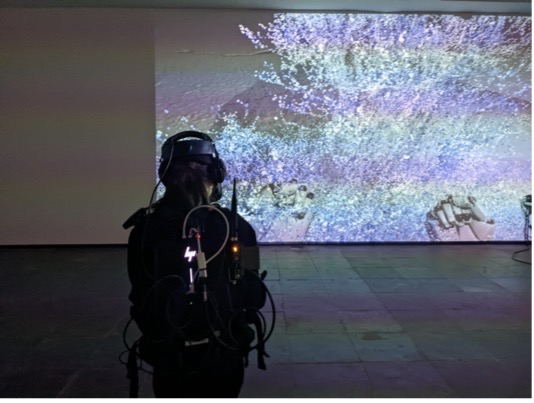 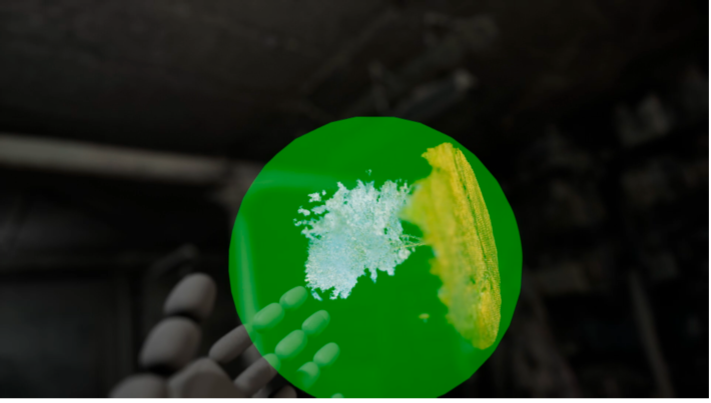 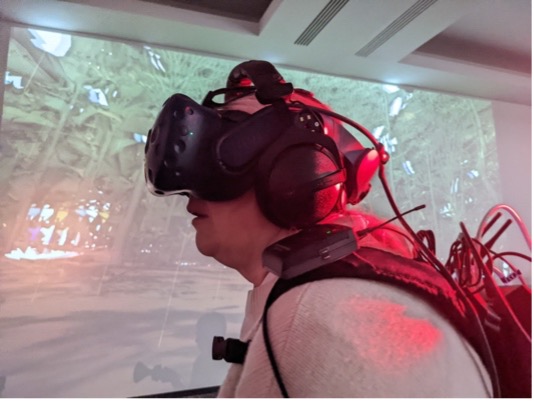 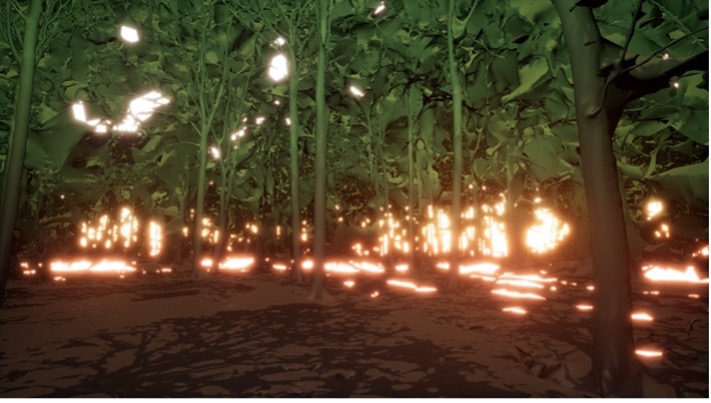 The study was performed according to ethical standards on 27 volunteers. B.D.I. (Beck Depression Index) scores higher than 14 were excluded as were suicidal ideations or history of psychosis. All patients were V.R. naïve.

Data collection for evaluation of “mood” included a self-assessment manikin (S.A.M) for arousal, valence and control and the registration of a 3 minutes EEG (19 ch) in “eyes closed condition” before and after the V.R. experience while during the whole journey in the V.R. environment a portable hart rate controller device was worn unobtrusively on the wrist to monitor cardiac rhythm during the emotional experiences.

Patients who were recruited on voluntary basis received 2 weeks ahead a detailed brochure explaining the concept of the Soulhacker V.R. experience, our study goal, setup and expectations in order to allow a well-informed consent.

Indexes of depression and anxiety included the Beck depression Index (B.D.I ) and the Hospital Anxiety and Depression Score (H.A.D.S) .

Valency and arousal emotional assessment scales were presented before and after the experience together with patient interview at debriefing. The majority of patients that were contacted 2-3 months later found this experience very worthwhile and agreed without hesitation to participate in follow up studies of the Soulhacker kind.

The quantitative electroencephalogram data (qEEG) were statistically evaluated (one sample T test: every patient acts his or her own control) by a third party professionally trained at qEEG analyst (K.W, PhD Columbia university, N.Y / USA) but blinded to the setup of the study in order to eliminate bias and assure that results reflect objective findings.

The qEEG data were registered locally by the neuropsychiatrist who was the study leader, using the Neuroguide™ software (A.N.I) with a Mitsar™ 2021 amplifier in a gel free 19ch Freecaps™ Ag/AgCl electrodes system. For the analysis the EEG traces were send to the USA for filtering and preprocessing assuring all artefacts were removed and only valid epochs were retained for analysis. Normality was established using the A.N.I normative database and statistical source density analysis was performed using swlORETA software (Ir Ernesto Palmero Soler /software developer C++) Neuronavigator™ and Navistat™ software packages.

What happened to the music?

While mood lifting effects of music are well known we opted NOT to add musical enhancement at this stage as it would have blurred the intrinsic effects of the V.R. itself. Of course, music has a very important therapeutic quality and is certainly considered as a possible add on in future study extensions.

Mood self-assessment before and after the VR experience showed a marked positive tendency improvement scores) on arousal, valence and control in all but six patients.

Results were obtained for every bin.

Statistical significance was only observed in 14-20 hz beta range.

Statistical significance was observed in the 20 Hz bin for BAs 17, 8 and 9 right hemisphere.

The Soulhacker pilot study has succeeded in its intention to provide proof of concept that the Ericksonian metaphoric hypnotherapy can be ported to a V.R. environment and be useful as a future concept of psychotherapeutic augmentation. In this pilot study the effect of a single V.R experience already showed a marked effect on mood (valence, arousal and control) on a visual self-assessment scale but also a statistically significant activation at the source level of brain electrical activity in hubs of the visual association cortex, hippocampus and important hubs of the default mode network.

Further studies are needed to extend the scope to measure the duration of the effect and the clinical effect size of consecutive sessions.

Conclusion: a path ahead

Soulhacker was fueled from its concept by a strong ethical concern as not to harm patients and therefore stressed the importance of free movement in physical space, securitization of patients (fall and collision prevention), prevention of simulator sickness, augmenting agency of the patient and psychotherapeutic nearness as main attributes. A computer-based system can and should augment - but never replace the psychotherapist. Deploying therapeutic and dynamical metaphors in virtual reality offers a powerful and flexible scene for further psychotherapeutic explorations. The use of qEEG to register and document induced functional brain changes in the hubs of concerned brain networks is an important method to objectively measure what effects the V.R has on the brain. Moreover, by individually linking symptoms to functional brain networks this technique can easily be extended to become a valuable aid in optimizing and personalizing the V.R environment to the individual patient.

Soulhacker has opened not just a window but a completely new portal to psychotherapy shaping its possible future as an augmentation technique deserving a place in the toolkit of every modern psychotherapist in the digital era of tomorrow.